Kelly and Shawmarie Jeffery - A Featured Presenter with WitchCon Online 2021

Bio for Kelly and Shawmarie Jeffery

As a boy he could never stay still. He explored the world which he could see in search of understanding and adventure. Mr. Kely found many things and was shown secrets that few his age would ever know. Those secrets led him to show others their own way and to build a man who was called to find even more.

His blood comes from a long line of warriors, so as a young man he set out to find that part of himself: first in boots and in fields not so close to home. Later, for money paid by a system bent on monopolizing the very existence of mankind. Never satisfied with where he was, he continued to search for more knowledge, and new adventures. This eventually led me away from what had helped me find the warrior within himself. Leaving only freed him. He found a Pirate, a man of the seas and the wind, willing to go any distance in search of more… More what, you may ask, but the answer is simply more.

In his life travels he has learned many secrets of our reality; And have built a place for all to come and learn from those that share the knowledge. Mr. Kely has become a teacher, a leader of a people that can have the vision to see their direction and their own foundation. These people have become his modern tribe, a tribe modeled after the tribe that lives in his blood. A Norse Tribe of old. He is their Gothi, and he will continue to teach those in search of knowledge until he draws no breath from this life.

Miss Sha’: Bayou Queen & Cajun Swamp Witch extraordinaire, brings her own brand of genuine bayou style Swamp Magick, with pieces of Rootwork and Southern Conjure at its heart. She also incorporates her own deep ancestral roots of Norse Spækona and Læknir magicks, as well as those folk magic practices from Scotland, the British Isles, and other Northern European traditions.

Miss Sha' has a very unique and close working relationship with Death and all manners of deities associated with aspect. Necromancy and working with land spirits is a huge part of her practice.

She also specializes in herbs, healing arts and fertility.

Miss Sha' has been been on her unique path for over 40 years. Her love of conjure and magick started before she could even walk. Surrounded by magick and conjure as a child, true to her roots is how she was raised. When asked to describe herself, Miss Sha’ will often say: Country Girl, Swamp Witch, Army Veteran, Bayou Queen, Bowhunter, Pirate, Mountain Girl, and Diva of Death! 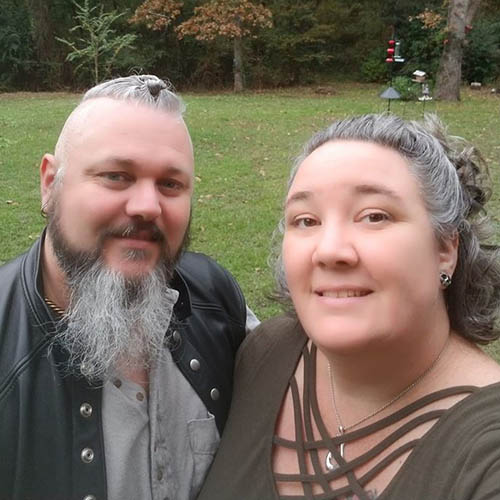